Gigi is a musical with a book and lyrics by Alan Jay Lerner and music by Frederick Loewe. It is based on the novella Gigi by Colette and 1958 hit musical film of the same name. The story concerns Gigi, a free-spirited teenaged girl living in Paris at the turn of the 20th century. She is being groomed as a courtesan in her family's tradition. Before she is deemed ready for her social debut, she encounters the bon vivant bachelor Gaston Lachaille, whom she captivates as she is transformed into a charmingly poised young lady.

The original Broadway production, produced by Edwin Lester in 1973, ran for a disappointing 103 performances but won the Tony Award for Best Score. A West End production played in 1985.

A new production of the musical, adapted by Heidi Thomas and directed by Eric D. Schaeffer, premiered at the Kennedy Center (Washington, DC) in January 2015, and opened on Broadway April 8, 2015 at the Neil Simon Theatre. The revival production closed on June 21, 2015.

Gigi originated as a 1945 novel by Colette, which was adapted for the screen with Danièle Delorme in 1948. In 1951 Anita Loos adapted the novel for the stage, and the Broadway production of Gigi starred Audrey Hepburn in her first major role.[1]

Seven years later, while My Fair Lady was in Philadelphia prior to its Broadway opening, Arthur Freed[2] approached Lerner about a feature film musical adaptation. Although Loewe had vowed never to work in movies, he was charmed by the book and agreed to collaborate on the project. The 1958 film of Gigi proved to be a major critical and commercial success and the winner of nine Academy Awards, including Best Picture 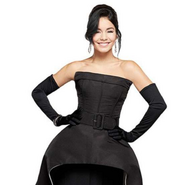