Ashley Michelle Tisdale (born July 2, 1985) is an American actress, singer, and producer. During her childhood, she appeared in more than 100 TV advertisements and had roles in theatre and television shows. In 2004, she was cast as Maddie Fitzpatrick in Disney Channel's The Suite Life of Zack & Cody, and rose to prominence in 2006 as Sharpay Evans in the television film High School Musical. The High School Musical series included three films and the spin-off Sharpay's Fabulous Adventure (2011). Tisdale's resultant popularity led her to sign a record deal with Warner Bros. Records in 2006. Her debut album, Headstrong (2007), was certified gold by the Recording Industry Association of America (RIAA) and features the single "He Said She Said". Two years later, Tisdale released her second studio album, Guilty Pleasure. In 2013, she announced plans to make music again and confirmed that she has been recording her third studio album.

Ashley Tisdale Is Vanessa Hudgen's Best Friend They Met Back When they did a sears commercial. They became close friends and Vanessa went to Ashley's birthday party

They Got Tattoo's Together 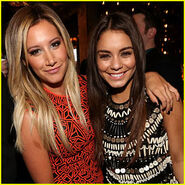 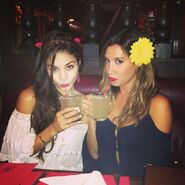